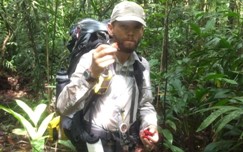 I only published a handful of videos during the #expedition. Mainly due to the absence of expensive satélite kit, data storage plus infrequent v-weak Internet access etc. The final several months I managed to edit my blog & upload videos via an #iPhone

Videos - Ascent Of The Amazon

We heard a huge tree fall VERY close to our campsite during a nighttime storm. As it crashed down it shook the ground. Diego and myself went to investigate the following morning. Location. Peru. Close to the Brazil Peru border. December 2018. https://www.instagram.com/p/Cg66VttuUPz/?igshid=MDJmNzVkMjY=

At times I miss the tranquillity of the jungle, you don't need to "Prove your humanity" to get things done! wilderness = freedom

“An end is only a beginning in disguise” ~Lounsbourgh

Well here it is, the last blog of the expedition – of my Amazon odyssey. I have reached the Pacific, a destination that at times during my trek I wasn’t sure I would ever see. I dreamed about this day many, many times over the course of the expedition, and now I have finally arrived at my ocean of dreams.

My little legs have gotten me through, up, down, around, over and under one of the most diverse and challenging terrains on earth, following the Amazon river from the Atlantic Ocean in Brazil to the Mismi source high in the Peruvian Andes and down again through the arid mountains and fertile valleys to the Pacific coast.

The final day for me was more emotional than arriving at the Mismi summit. It really began to hit home when I saw the ocean for the first time in six and a half years. I choked up a little at the sight, but managed to hold back the waterworks. Then, as I got closer, the amazing smells of the ocean hit me, and the sun came out – a rare occurrence during the winter season here, and it stirred my emotions even more.

I was pleased and honoured to be accompanied by a handful of people for the final five kilometres along dusty sandy roads. Colca Trek owner Vlado Soto, and Quechua guide Brendisi Cayllahua, both of whom travelled all the way from Arequipa just to be with me and help with the filming etc, Peru journalist Adrian Quicano from La Pueblo national newspaper, and three local musicians who at the last minute kindly offered to walk with me and play their traditional panpipe, charango and drum music.

It wasn’t quite the finale I had envisioned. Being winter season here, most beach hotels, seafront restaurants and bars were closed, leaving the place a bit like a ghost town. I had imagined hordes of people dancing to loud music and fuelled with lots of ice-cold beer, witness to the crazy gringo diving into a warm sea – but the crowds come only in the scorching summer months of January to March, and so we were more or less alone. But it’s okay – I have learned over the course of my trek that things don’t always go according to plan, and it is more than enough that against all the odds I have made it to my destination alive and in good health!  It was a quiet but satisfying ending, with the crashing of the waves set to live music, a few onlookers – a fisherman, a few kids on bikes, several stray dogs and some seagulls surfing the ocean breezes.

As the musicians played, Vlado presented me with a special bottle of Pisco. I remembered first to drip some of it in the ocean as an offering to Pachamama, and we thanked the mountain gods for my safe arrival near the mouth of a small river that runs into to the ocean and – according to ancient tradition – flows ever on until it arrives with the gods themselves. Then I gulped down a good few mouthfuls myself!

I stripped off my shabby, worn-out clothes, and ran and dived into the cold-ish water of the vast Pacific. I confess to adding some salt from the tears in my eyes, before walking back to the beach and unravelling the flag displaying the Brazilian, Peruvian and UK flags plus the names of some more prominent supporters and of course all my guides. Overcome with emotion again after the journalist asked about my parents, the tears momentarily welled up once more, but they were tears more of relief and joy than of sadness.

I took a few drone shots and we all made our way back to Camana town where, after ditching a few things I no longer needed, including a tiny electric kettle I had used over the last 18 months to cook everything from pasta and rice to boiled eggs, tea and coffee, I gathered up my belongings and travelled to Arequipa with Vlado and Brendisi. What a day! A day I will always remember.

I’m now in Arequipa, from where I need to go on to Cusco again to collect all my spare gear stored there.I made it onto the front page of La Pueblo newspaper thanks to the Journalist (see Photo)

Realization
I’ve come to realize this journey was not all about me and my trials and tribulations, but about the Amazon rainforest and the Andes and everyone and everything that lives there including all the vast interconnected biodiversity of flora and Fauna

I hope that when the whole epic experience has sunk into my soul, I can finally convey in a book what I have learned and how this realization has evolved during my travels. This will be a challenge of a totally different kind for me – prior to the blogging I have done over the past six years, the only writing I had done since I left school at 16 was on birthday cards, cheques, and the occasional contracts.

Thanks
Mega-thanks to all who have followed me and especially to all who so generously donated to keep the expedition going. Without you, I simply could not have kept going. You are all on my Partners page, and will be in the book if I get to write one. Thanks also to my kit sponsors including Fatmap, Altberg boots, Hennessy Hammock, and Water to Go. Also eternal thanks to all the people on the journey who have helped me along the route – especially the local walking companions I hired and the people in all the villages who let me pass peacefully and made me welcome – the indigenous Ticuna, Kapanawa, Ashaninka, Shipbo, Quechua and mixed-race peoples who live a cash-poor life but who are so wealthy in spirit and in the fresh water and fertile soil of the forests and mountains along or near the riverbanks. I also want to thank Piotr Chmielinski and Canoandes for their faith in the project and for the financial support that saved the expedition from an untimely end, and Clive Maguire for his constant moral support and practical help since 2009 and throughout the project – from seed to source! And not forgetting Miroslaw Rajter, Dawid Andrés and Guillermo Castro Escudero who helped me out here in Peru with various logistical issues I had. And a very special thank you to Luke Collyer, Nina Plumb, Ramona Marks and John Goulden for your support.

Thank you as well, to…

…all the trees I passed, for not falling on me during storms
To the lightning, for missing me every time (so far)
To the floodwaters, for not drowning me
To the mosquitoes, for not giving me malaria
To the aquatic denizens who allowed me to swim the Amazon unmolested
To the venomous snakes and other amazing beasties, for not biting me
To all the people of the forest who suffered me to cross their territory in peace
To the mountain rockfall, for not rock-falling on me
To Brazil and Peru, for the privilege of seeing first-hand the priceless, magnificent, incredible, most biodiverse and important part of this earth machine we all depend upon.
To the Amazon Rainforest and it’s labyrinth of rivers that will be a part of me for the rest of my days.

Web of Life
I know I’ve put this 170-year old quote in my previous blogs a few times, but I feel it’s worthy of repeating in this last blog, as it feels more relevant than ever now.

“This we know – the Earth does not belong to man; Man belongs to the Earth. All things are connected, like the blood which unites one family. Whatever befalls the Earth, befalls the sons of the Earth. Man did not weave the web of life, he is merely a strand in it. Whatever he does to the web, he does to himself.” (Chief Seattle, 1854)

Dedication
I would like do dedicate this final blog to both my parents, who left the planet while I was away, my dad passing only two weeks before I finished. Also of course to my sister and her family who cared for them both unconditionally in their respective homes right up to their last day.

Also, to journalist Dominic Mark Phillips, a person like many before him who have lost their precious lives because they cared about the Amazon and were committed to helping save it and protecting the contacted and un-contacted indigenous – not just for their sake, but for the future of humanity. Rest In Peace, Dom.

On a final note
I am still seeking sponsorship to walk to the Mantaro source of the Amazon (the most distant source of interrupted flow) from the point I passed last year at the river mouth where it meets the Ene and  Apurimac rivers This bolt-on expedition would take about 7weeks to complete. Please contact me if you are a kit sponsor or corporate or personal sponsor who would like this opportunity.
I would love to do this before I return to the UK.

Also I plan to write a blog about the kit and how it evolved over the expedition. Watch my Twitter feed!

My support page is still open for donations via the PayPal link below. Any donations of £25 / $30 or more will receive the special signed 2023 calendar, with unique images from my trek – delivered anywhere on the planet.

Link to my Paypal on support page

Header image: Journalist Adrian and I trying to stop the wind taking the flag. Vlado Soto holds up the Polish flag as I received a lot of support from Canoandes Polish team.

Finally arrive at a place I’ve dreamed about for years.

Some of the poorer residents in the valley live in these bamboo houses.

Accompanied by musicians panpipe music as I approach the sea.

Getting ready to ditch my backpack for the last time.

Pisco to celebrate the finish.

I couldn’t stop looking at the ocean!

8 comments on ‘Ocean Of Dreams’: